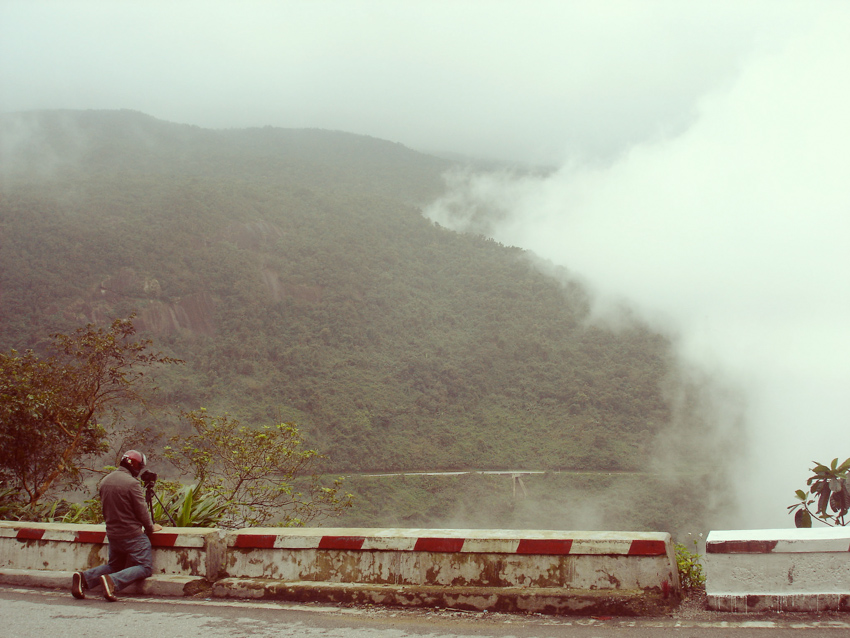 Some time ago now I did a motorbike trip through the interior of Vietnam from Hanoi in the north to Saigon in the south with the intention of putting together a short video of the trip. The trip was roughly 1000 kilometers on some of the worst roads I have ever experienced. It took a month. It was tough. It was also memorable. On the way I encountered some of the most beautiful and enchanting landscapes I have ever seen. Hit the jump for an account of our experiences, photos, a map of our route and the video…

I arrived in Hanoi late January with Gemma my girlfriend, and it was cold, which was the first surprise.  I had looked up on the internet the possibility of buying a motorbike and found that while it was illegal to own a motor bike, if you bought from the right guys, they would give you a rental card so it looked like you were renting the bike. We found the right guys and $500 US later we were in business. I drove around Hanoi for a couple of days, getting used to the bike as I hadn’t driven one with gears before. The day came to depart Hanoi so I tied our 30 kilos of luggage to the back, Gemma jumped on board and we set off on our trip.

Our main concern in Vietnam was to escape the tourist trail which runs down the coast via Highway one. In southeast asia we found it is all too easy to end up being trucked around like cattle from one resort to another and whilst that can be fun, it can also be insanely boring. One can easily end up feeling deprived of discovery. This was the fundamental reason for buying the bike, so we searched for an alternative route and discovered the Ho Chi Minh Highway. Highway is a wildly ambitious term incidentally – in the war it was a series of secret trails used by communist leader Ho Chi Minh, to get supplies to the Viet Cong on the front line in the south. Since then some of it has been laid with tarmac but it is little more than a cycle path winding through mountains and jungle.  For the first half of our trip through the north of Vietnam the roads were quiet - we spent the night in small villages and stayed in little homestays. Often there were no shops or places to buy food, so we paid the family at the homestay to cook for us. The scenery was stunning, often shrouded in a mist that reminded me of Vietnam war movies. It created a mysterious landscape and at times a rather ominous atmosphere.

We were surprised to find that, while the Vietnam war ended 40 years ago, in the backwaters of Vietnam it still seemed to be very much in the hearts and minds of the people. We sadly found a fair deal of social disintegration not expected in such sleepy villages and often were affronted with hostility and aggression. Many took it upon themselves to remind us who won the war, which would have been amusing in a Fools and Horses sort of way, if it hadn’t been so aggressive. That’s not to say we didn’t have great experiences, the young people in Vietnam, in particular, were often friendly and curious, their brash enthusiasm infectious. In fact, as we became more familiar with the conflicted political back drop of Vietnam, and the social issues, described by a fellow traveller as ‘a country suffering from post traumatic stress’, we began to realise how much enthusiasm and  energy they would need to push their country into the new century. In some ways it is the young people we met that have stuck in our minds the most since the trip. 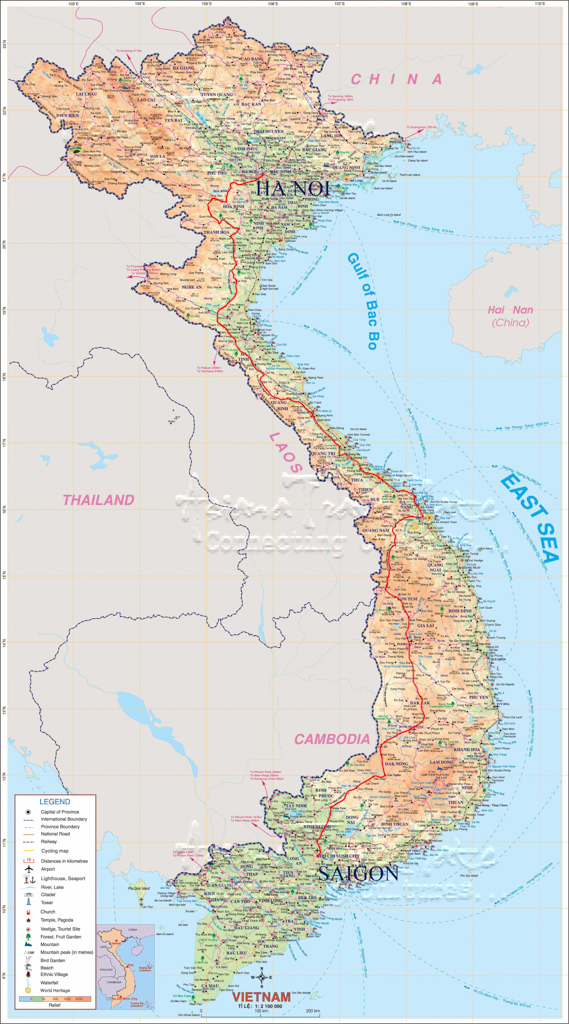 In the middle of the trip we turned off the Ho Chi Minh Highway to see the DMZ. DMZ is short for demilitarised zone which ironically is where most combat took place during the Vietnam war. Having realised how prevalent the war still is there, I wanted to get some footage of the area. We visited the mass grave sites and found abandoned US military equipment. We visited the Vinh Moc tunnels where an entire village had lived for 11 years to avoid American bombing. Some of the original inhabitants still worked on the site. We only spent a few days in the area but it was a sobering experience. 1 to 3 million Vietnamese died in the war and the suffering caused by American bombing, chemical warfare such as agent orange, and napalm fire bombing is absolutely staggering. Their resilience in the face of what can only be described as utter devastation left us in a sombre mood. 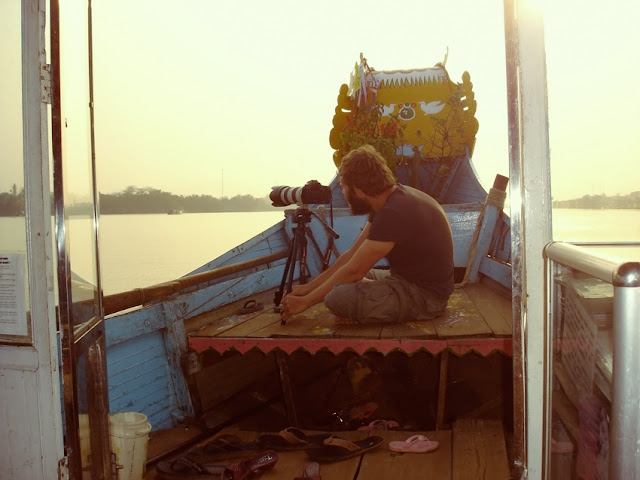 After the DMZ we headed towards the coast to visit the Imperial City of Hue which was beautiful and took a boat trip down the Thuan An to see life on the river. I managed to capture some good footage here a lot of which ended up in the final cut. After relaxing for a few days in Hoi Ann (a tourist town south of Hue) we headed back into the interior of Vietnam. Here the landscape became more expansive; huge rivers, enormous mountain ranges and dusty flats kept us guessing what would be around the corner. The road snaked on, sometimes a full two lane A road, others a mere dust track. One day, we came across a dry river bed, which had once clearly flooded, and swallowed the road running along side it. There was no way to get the bike through so we had to back track. 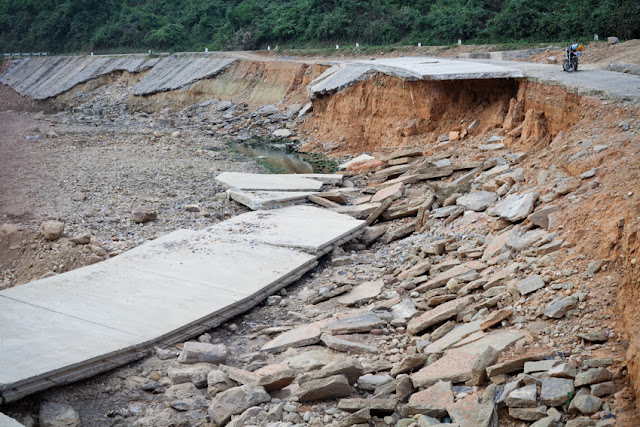 As we came closer to Saigon the roads became busier. Trying to describe how bad the Vietnamese driving was is impossible but suffice to say, getting driven off the road became a daily occurrence. Scooters are by far the most prominent method of transport but in the south, huge old trucks and buses driving at unbelievable speeds, on tiny roads, made driving tricky. We would sometimes come round a blind bend to be faced with an oncoming bus overtaking another bus that was overtaking a truck. All on a road that barely had two lanes. It seemed the Vietnamese do not fear death. According to an article I read researching for this post ‘Most Vietnamese believe strongly in fate, and that death will come to them when it is meant to. This contributes to a fatalistic attitude towards road safety.’ As a result, we came across accidents every day, some were pretty gruesome. Official figures claim road casualties at 12,000 a year but it is believed that the truth is over double that. As a point of comparison, here in the UK that figure is under 2000.
Arriving in Saigon after a month of driving through such untouched landscapes was a bit strange. Saigon is fairly modernised by comparison and has all the frantic bustle of an asian city. We sold the bike for about $350 US dollars and bid farewell to our travel weary and temperamental traveling companion. I may have seen more of the inside of her engine than the outside but she had got us there in the end. It was a sad goodbye. Since our trip through Vietnam I have been keen to do another motorbike trip and have some exciting plans which I will be posting about soon. 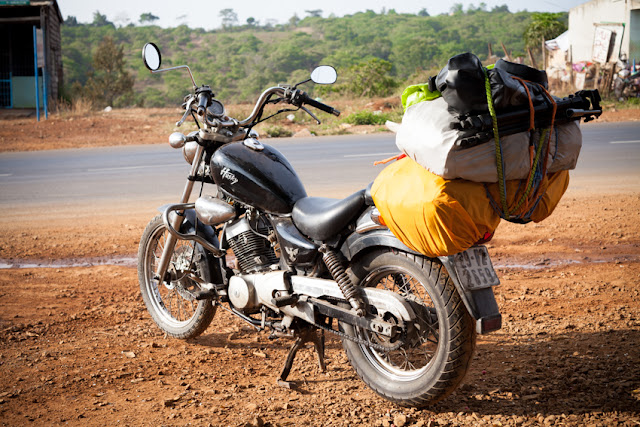