Shooting a Fashion Show for Money 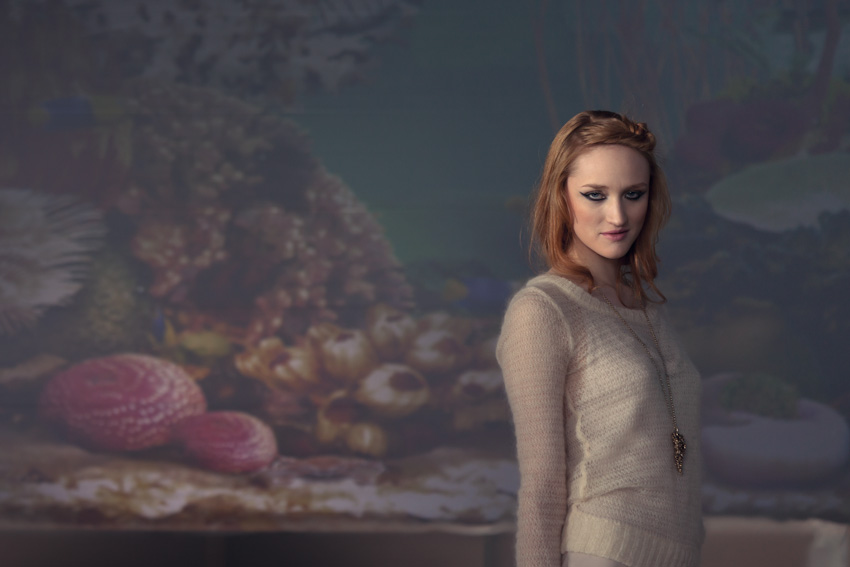 Having just undergone the worst blog drought in personal blogging history I thought I would kick things off with a blog on shooting a fashion show. Why? Because I’ve got a few blogs backed up and I have to start somewhere, right? A while ago I was commissioned to shoot the Harvey Nichols spring/summer 2012 fashion show. This is always quite an interesting gig as the brief puts me in several different shooting situations. Hit the jump to see the pics, write up of the day and the geeky lighting info…
The three main groups of shots are; behind the scenes, guests and catwalk. 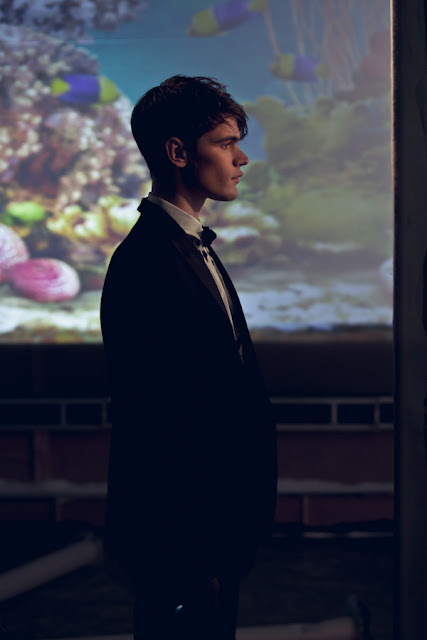 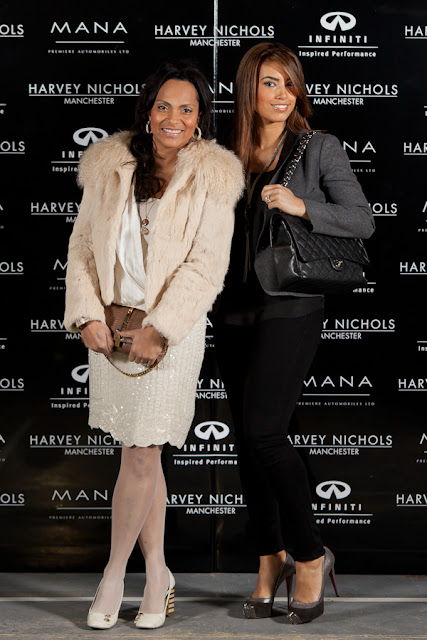 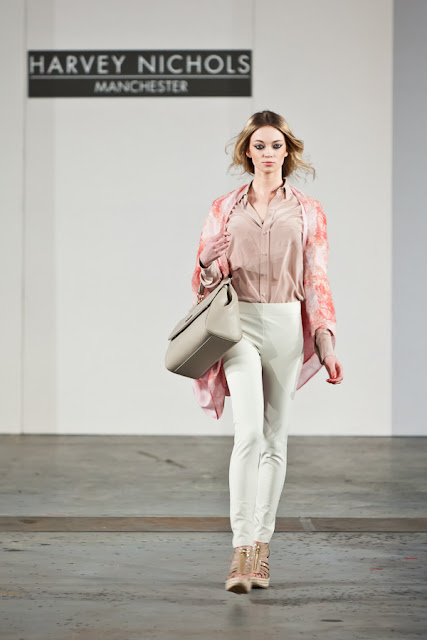 There are other shots required but these are the ones that never change. I always get to the venue early to get set up and plan out my lighting and this particular venue was a large listed building that apparently had been lying disused for over 4 years. Behind the catwalk it was so dark I couldn’t even focus without an auto assist light from my flash. People were wondering around with torches putting the clothes on hangers and laying out accessories. I silently thanked my lighting arsenal I bring to these gigs and moved on to the cat walk. The set guys were hours away from the final light setup for the catwalk so trying to figure out what my approach to catwalk shots would be, would have to wait. The thing about a fashion show is that when the time comes, in this case around 6pm, everything happens at once. The VIP guests start filtering in, the models start getting into their clothes and having their makeup retouched, the set guys finally finish their light setup on the catwalk. So it is around this time I start resenting the fact that I am no longer a simple amoeba that can split into two at any moment. I always have an assistant with me, usually the beautiful Gemma, to help. Harvey Nichols like to have a names list to compliment the guest photographs so Gemma rounds up the guests with a clip board taking names as I shoot them in front of the press board. She also keeps out in the front while I’m getting behind the scenes shots and calls me when I need to come out front to get a shot of a particular guest. 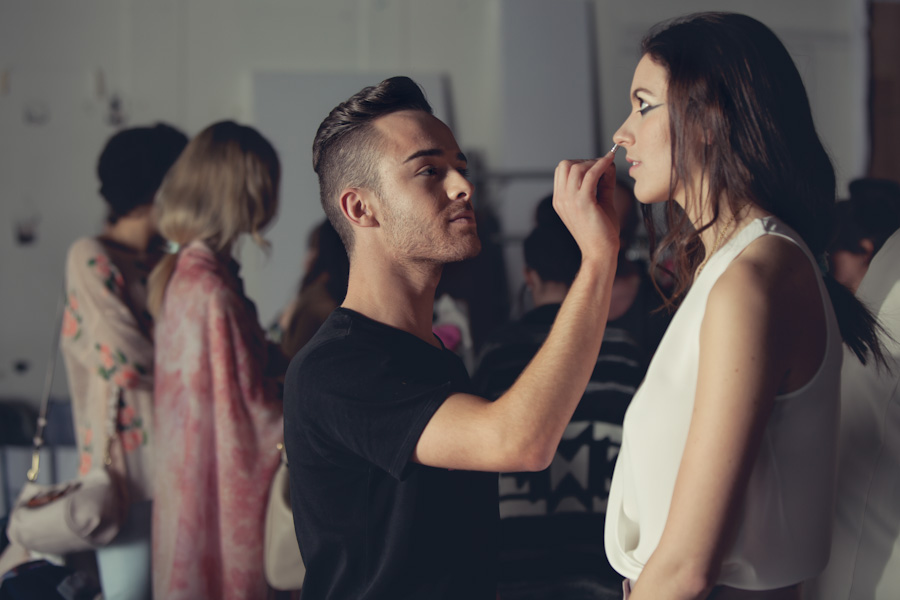 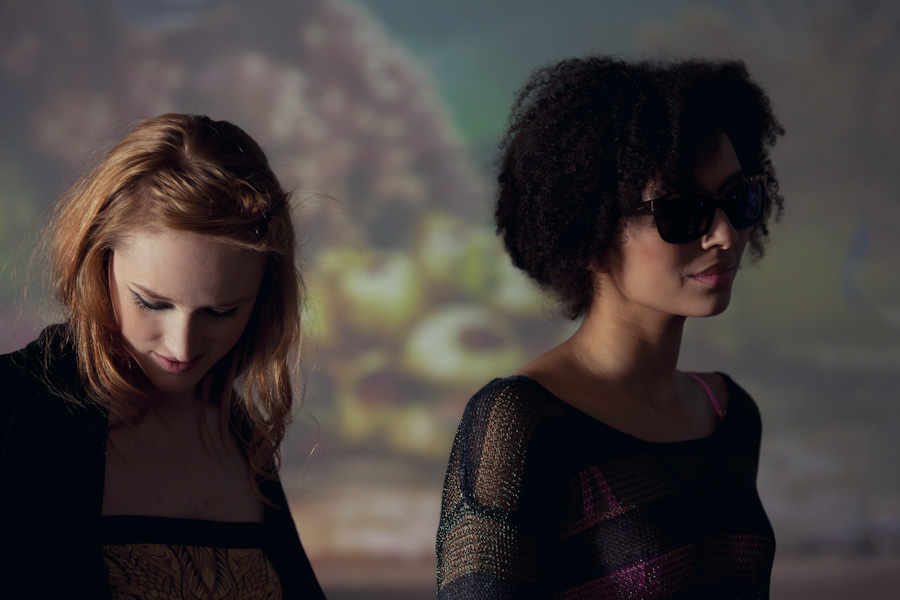 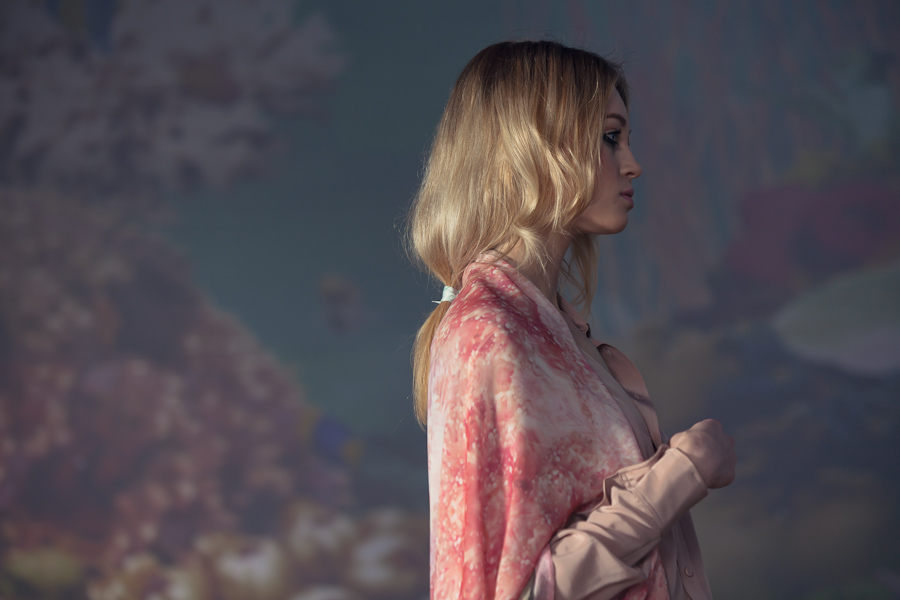 Then the catwalk show starts and everything is abandoned to get the most important shots of the day. The Outfits. By this time I have nailed my exposure for the cat walk so it is just a matter of getting the focusing pin sharp on a subject moving at speed and getting it right for every single one of the 55 outfits! To be fair I missed one during a card change. 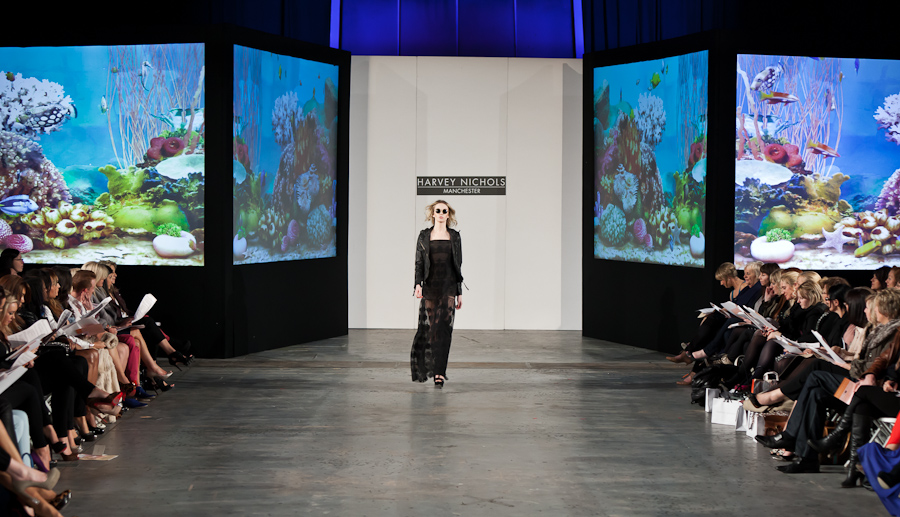 Afterwards, its packing up time and back home, dominoes pizza, uploading cards and then choosing the photos, processing, and emailing them out for the press release the next day. I usually get to bed for about 7 in the morning. I’ve been holding off for as long as posible but, now, it’s geeky lighting time! Woo!
Geeky Lighting Info:
Behind The Scenes
As I mentioned before, on this particular gig there was zero lighting behind the set but there was plenty of space. The solution to get nice even light out into the space was my profoto acute b2 shooting into a very large and slightly parabolic white umbrella. Its worth mentioning that a speedlight would happily be able to do the same job here. Because the space was so large, I was able to get some distance between my light and where the subjects were milling around. It didn’t matter too much that they were moving around because the light was far enough back to put them in the ‘low drop off zone’.Low Drop Off Zone explanation:Looking at the diagram below you can see that while you are very close to the light there is a big change in the amount of light, from f16 to f5.6, in a short distance. If I had a subject wondering around in that area my exposure on them would be all over the place. However, if I am able to pull my light back away from the area I want to shoot in I have a large area where the drop off is only a stop (f5.6 – f4). This is far more manageable. You are then free to shoot with out having to constantly change camera settings. Of course as you pull your light back its relative size (and thus softness) decreases. To compensate for this I have found a mahoosive umbrella really sorts the issue. I was using a extra large 5ft umbrella from calumet here but I liked the light so much I have traded that in for a even bigger more parabolic 7ft umbrella from paul c buff. Then as long as I’m keeping the umbrella roughly 45 degrees to my left or 45 degrees to my right I’m getting beautiful soft side light that is even across a large distance. Pretty nice. 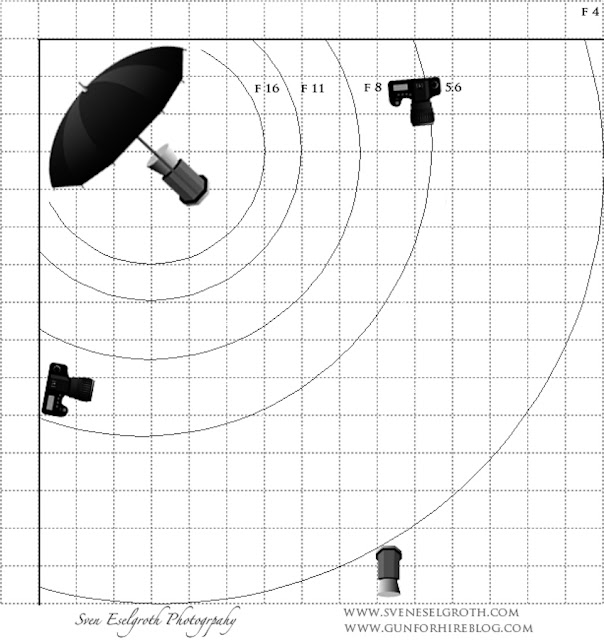 I also had a speed light on hand which I was bouncing of walls for a bit of fill if needed as you can see further down the wall in the pull back below. 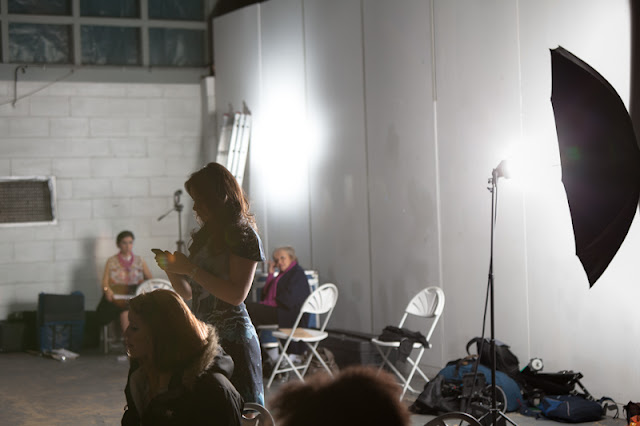 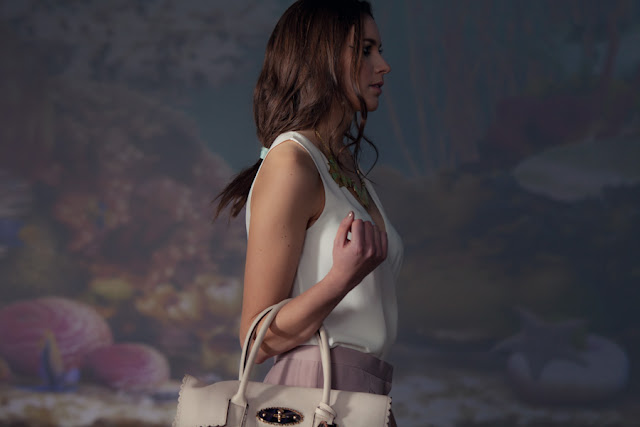 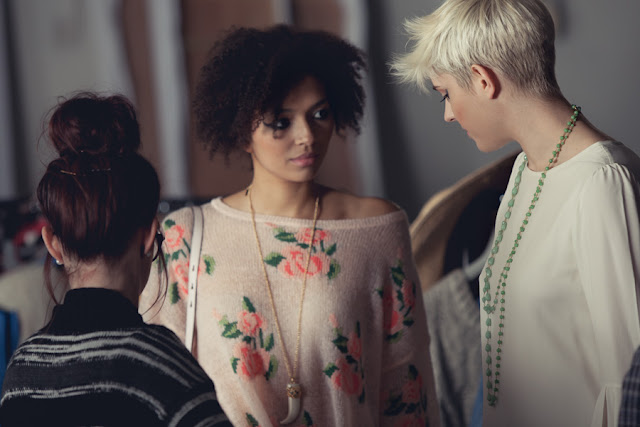 The great thing about working in the low drop of zone is if a group shot is needed you are ready to go as long as you have all your subjects within that area. 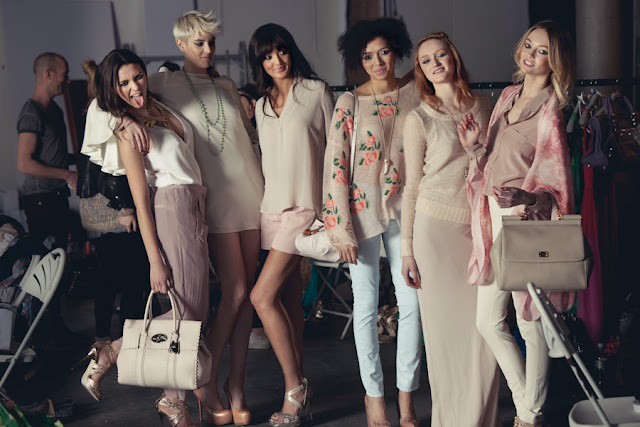 For the guest shots I was shooting against a shiny black background. If haven’t shot against a shiny black background before and you are an ‘on camera’ flash lover, you should make a mental note to completely shit yourself the next time you see one. As your on camera flash is 100% on axis your flash reflection with be a massive white hotspot bang in the middle of your black frame just above your subjects. Nice. Your client hates you and is punishing you. Or they have no idea how light works. I like to think its the latter. Most press boards are matt white so no problem there but even if they are shiny white you can probably get away with it, as the hot spot is white and the board is white. You’ll still see it but its not too in your face. If your board is mat black you will also be ok because the matt will absorb the reflection. But shiny black? Your fucked. Solution? I use two speedlights with shoot through umbrellas quite far left and right. Then I put on a long lens and move back until the umbrella reflections move outside either side of the frame. On this pull back you can just see the reflections on either edge of the board. If I moved forward those two reflections would start to move inwards according to the family of angles involved. Incidentally I think this setup is more flattering than on camera flash and it is always my preference to go with this setup shiny black board or not. 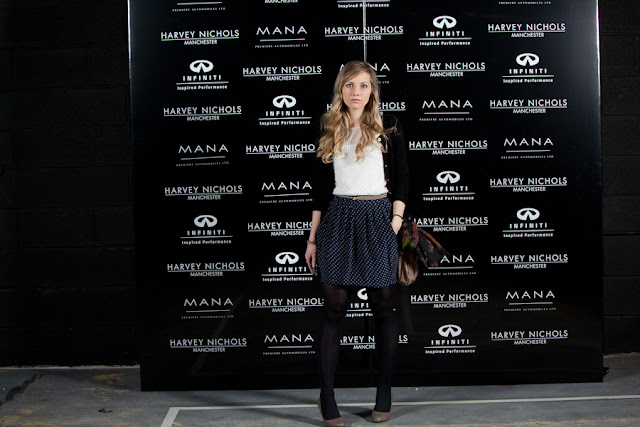